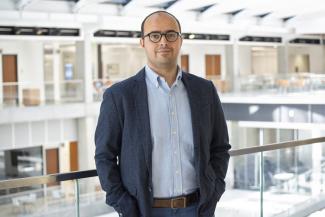 ECP awards are one of the most prestigious honors bestowed by the Army on outstanding scientists beginning their independent careers. The objective of the ECP is to attract outstanding early career university faculty members to pursue fundamental research in areas relevant to the Army, to support their research in these areas, and to encourage their teaching and research careers. Outstanding ECP projects may also be considered for a Presidential Early Career Award for Scientists and Engineers (PECASE).

"In a significant fraction of Artificial Intelligence (AI) problems, our main goal is to design systems that use prior experience and knowledge to adapt to new tasks efficiently," said Mokhtari.

"Meta-Learning formalizes this goal by using data from previous tasks to learn update rules or model parameters that can be fine-tuned to perform well on new tasks. This approach is specifically effective for modern DoD-relevant applications, ranging from robotic sensing and autonomous planning to experimental design and active learning, in which we require adaptation to new tasks or environments with access to limited data from new tasks and limited computational power to adapt to new tasks. In such data-starved and computationally limited settings, meta-learning allows for fast and efficient adaptation by exploiting the similarity of past learning tasks and leveraging the connection between observed and unseen tasks. The main goal of this project is to introduce new theoretical frameworks for studying meta-learning and develop novel and computationally-efficient meta-learning algorithms for accelerating adaptivity under limited data and computation. "