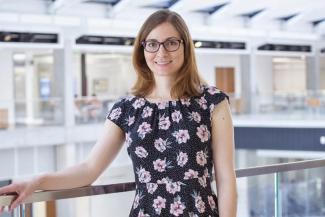 Prof. Emily Porter of Texas ECE has been named the recipient of the 2021 Lot Shafai Mid‐Career Distinguished Achievement Award by the IEEE Antennas and Propagation Society (IEEE AP-S). Prof. Porter received the award for "contributions to microwave medical technologies, standardizing the methodology for measuring the dielectric properties of biological tissues, and advocating for women in engineering.”

The Lot Shafai Mid-Career Distinguished Achievement Award was established in 2013 to recognize the past technical accomplishments and future potential of an outstanding woman of mid-career status in the field of antennas and propagation.

Emily Porter is an Assistant Professor and Jarmon Innovation Fund Fellow in the Department of Electrical and Computer Engineering at The University of Texas at Austin.

Prior to joining Texas ECE Dr. Porter was an EU Marie-Curie Fellow and Adjunct Lecturer with the Translational Medical Device Laboratory at the National University of Ireland Galway (NUIG). She received her B.Eng., M.Eng., and Ph.D. degrees in electrical engineering from McGill University, Montreal, Canada, in 2009, 2010, and 2015 respectively.