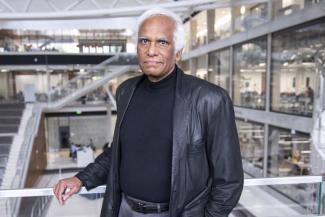 Texas ECE professor Jacob Abraham has been named the 2020 recipient of the SIGDA Pioneering Achievement Award by the Association for Computing Machinery Special Interest Group on Design Automation (ACM SIGDA) for "pioneering and fundamental contributions to manufacturing testing and fault-tolerant operation of computing systems."

The SIGDA Pioneering Achievement Award "honors a person for lifetime, outstanding contributions within the scope of electronic design automation, as evidenced by ideas pioneered in publications, industrial products, or other relevant contributions. The award is based on the impact of the contributions throughout the nominee’s lifetime."

Jacob A. Abraham is a professor in the Department of Electrical and Computer Engineering at The University of Texas at Austin. He is also director of the Computer Engineering Research Center and holds the Cockrell Family Regents Chair in Engineering #8. Professor Abraham's research interests include VLSI design and test, formal verification, and fault-tolerant computing. He is the principal investigator of several contracts and grants in these areas, and a consultant to industry and government on testing and fault-tolerant computing. He has over 300 publications, and has been included in a list of the most cited researchers in the world. He has supervised more than 60 Ph.D. dissertations. He has been elected Fellow of the IEEE as well as Fellow of the ACM, and is the recipient of the 2005 IEEE Emanuel R. Piore Award.