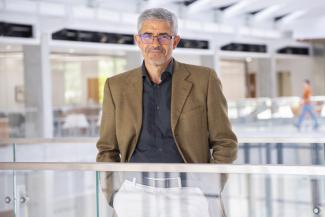 Texas ECE professor José del R. Millán has been elected as a Fellow to the International Academy of Medical and Biological Engineering (IAMBE) for his outstanding contributions to the profession of medical and biological engineering.

Election to the Academy is highly selective, initiated by nominations which are involved with at least 3 current Fellows and screened by the Membership Committee of the Academy. The election is conducted by a vote of all Fellows of the Academy. There are currently less than 200 Fellows world-wide.

Dr. Millán has made several seminal contributions to the field of brain-machine interfaces (BMI), especially based on electroencephalogram signals. Most of his achievements revolve around the design of brain-controlled robots. He has received several recognitions for these seminal and pioneering achievements, notably the IEEE-SMC Nobert Wiener Award in 2011 and elevation to IEEE Fellow in 2017. In addition to his work on the fundamentals of BMI and design of neuroprosthetics, Dr. Millán is prioritizing the translation of BMI to end-users suffering from motor and cognitive disabilities. In parallel, he is designing BMI technology to offer new interaction modalities for able-bodied people.