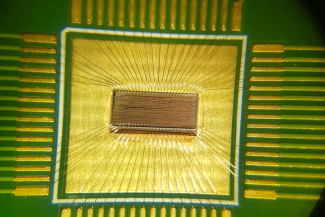 Researchers in the Cockrell School of Engineering are in the midst of a yearslong effort to build the processors that could power next-generation technologies, such as driverless cars and automated manufacturing. And they have just created a fresh take on a key building block of this new crop of chips that promises increased computing speed and superior energy efficiency.

In a paper recently published in the journal Nature Communications, the researchers present a demonstration for a silicon-integrated, photonics-based electronic-photonic arithmetic logic unit. Arithmetic logic units are important components of a processor that perform all the calculations for CPUs.

The discovery is part of a larger $6.5 million project sponsored by the U.S. Air Force Office of Scientific Research and led by electrical and computer engineering professors Ray Chen and David Z. Pan. The project aims to create a myriad of ultra-low power nano-optoelectronic devices, to reduce processor power consumption and latency while boosting speed.

Due to the saturation of Moore's Law — the decades-long trend of computers becoming faster and less expensive over time by packing more transistors into a single chip — researchers are looking for new ways to make processors more powerful. This project is built on the increasingly popular concept of optical computing in both digital and neuromorphic computing, which uses photons rather than electrons to transport and process information. Optical computing can utilize dense wavelength division multiplexing (DWDM) for more efficient processors that can more effectively use the integrated photonic circuits and components. This unleashes the potential for next-level computing.

"Our optical computing devices have demonstrated speed beyond state-of-the-art processors, using much less power with lower latency, which means you can build a much faster computer that is more energy-efficient," Chen said.

The new logic units will allow the team's chips to achieve processing speeds of more than 20GB per second, more than four times the speed of today's best electronic counterparts. The processors aim to use only 30% of the energy consumed by their current contemporaries, while reducing latency by 10 to 100 times.

The team’s silicon chip was designed at UT Austin with and then fabricated at the American Institute for Manufacturing, a federal consortium for nanofabrication. Chen compared the process of fabricating computer chips to building skyscrapers, but on a nano scale. Each layer of the processor — similar to a floor in a building — must sit precisely on top of the last. The smallest mistake can bring the whole structure tumbling down.

"Alignment is critical," Chen said. "If one layer has one micron of deviation, the whole process fails. The inaccuracy will demolish all of the efforts."