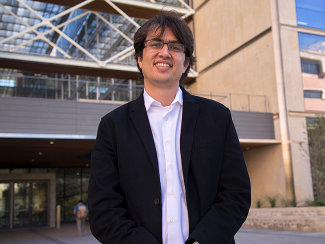 Prof. Soloveichik is among the 126 young scholars from across the country selected by the Alfred P. Sloan Foundation to receive this award. Each recipient will receive a two-year, $75,000 fellowship to further their research.

Soloveichik, assistant professor in the Department of Electrical and Computer Engineering, focuses on molecular programming — engineering complex molecular systems for synthetic biology, nanotechnology and bioengineering — as well as creating computing models inspired by nature. Recently, he created a chemical oscillator that uses only DNA components, demonstrating that DNA alone is capable of complex behavior. His team published their findings in Science. Soloveichik received a National Science Foundation CAREER Award in 2017.

Sloan Research Fellowships are awarded in close coordination with the scientific community. Candidates must be nominated by their fellow scientists and winners are selected by independent panels of senior scholars on the basis of a candidate’s research accomplishments, creativity and potential to become a leader in his or her field. Nearly 1,000 researchers are nominated each year for 126 fellowship slots.

“To receive a Sloan Research Fellowship is to be told by your fellow scientists that you stand out among your peers,” said Adam F. Falk, president of the Alfred P. Sloan Foundation. “A Sloan Research Fellow is someone whose drive, creativity and insight makes them a researcher to watch.”