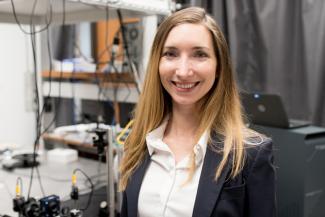 Prof. Jean Anne Incorvia of Texas ECE along with Prof. Supriyo Bandyopadhyay of Virginia Commonwealth University have received a National Science Foundation (NSF) Grant to study and demonstrate a system that will greatly reduce the hardware burden associated with generating correlations between two or more p-bit streams.

One of the major challenges in probabilistic computing is the complex hardware needed to generate required correlations between probabilistic (p-) bit streams. This hardware usually consists of microcontrollers, analog-to-digital converters, shift registers, etc. that consume too much power and vastly expand the system’s footprint on a chip. In this project, we will study and demonstrate an ultra-compact and extremely energy-efficient correlator or anti-correlator that can generate tunable degrees of anti-correlation between two p-bit streams. It is implemented with two magnetic tunnel junctions (MTJs) whose soft layers are in close proximity and hence dipole-coupled. Bit states are encoded in the resistance states (high or low) of the MTJs. One MTJ generates a p-bit when driven by a spin-polarized current delivering a spin-transfer-torque. The current sets the resistance state high or low with a probability determined by its magnitude, while the bit state of the other MTJ is determined by dipole coupling with the first. Very strong dipole coupling will result in perfect anti-correlation, while very weak dipole coupling will result in no correlation. We will control the effect of dipole coupling by applying (electrically generated) local strain to the second MTJ, which modulates its internal energy barrier, thereby modulating the degree of anti-correlation between the p-bits from 0% to 100%. This project will result in new understanding and devices that use emerging nanomagnetic physics for the next generation of computing.

Jean Anne Incorvia is an Assistant Professor in the Department of Electrical and Computer Engineering at The University of Texas at Austin. Dr. Incorvia is focused on developing practical nano devices for the future of computing using emerging physics and materials. This has included research in fabricating spintronic logic devices and circuits, new types of magnetic memory using spin orbit torque effects, the intersection of 2D materials and spintronics, and using low-dimensional materials for interconnects and transistors.

Supriyo Bandyopadhyay is Commonwealth Professor of Electrical and Computer Engineering at Virginia Commonwealth University.  Prof. Bandyopadhyay has authored and co-authored over 400 research publications and presented over 150 invited or keynote talks at conferences and colloquia/seminars across four continents. He is the author of three popular textbooks, including the only English language textbook on spintronics.