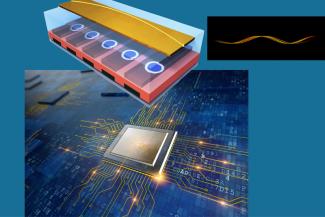 Current AI like Youtube’s algorithm, are distant from human-like intelligence as they lack the high-level cognitive skills shown by the brain like making complex decisions. To solve a Rubik’s cube, current AI models use energy produced from 3 nuclear plants for an hour, more than 1,000 desktop computers and copious amounts of training data [1].

“Addressing this challenge, our results take an important step towards building human-like AI,” said Dr. Priyamvada Jadaun, an alumnus of The University of Texas at Austin (UT Austin). “We identified that neuromodulation, a process by which the brain regulates its functioning, is a crucial requirement for many high-level intelligence abilities that are missing in current AI.”

Along with Prof. Jean Anne Incorvia, Assistant Professor at UT Austin, and her team, Dr. Jadaun has designed and simulated the first artificial neuron (a cell in the brain) whose functioning can be regulated, realizing neuromodulation. Their work uses magnetic textures called skyrmions as they are small, stable, and versatile and will be presented at APS March Meeting 2022

“Depiction of neuromodulation in the artificial neuron. A change in the external environment, situation or context, changes the internal structure of the neuron by repositioning its constituent skyrmions (blue circles) from a straight line (top left) to a staggered arrangement (top right). This restructuring in turn alters the functioning of the neuron, changing its response from a negligible output (left) to a large output wave (right).”

IMAGE CREDIT: THE UNIVERSITY OF TEXAS AT AUSTIN

This artificial neuron is the first to show two high-level intelligence abilities seen in the brain. First, the neuron can make complex high-level decisions while considering multiple factors (context-awareness). Second, it computes in a flexible manner, connecting or disconnecting from circuits as the situation demands.

The team has used this neuron to simulate diagnosis of breast cancer and shown that it performs the diagnosis with higher accuracy than current AI, while using much lesser energy, smaller area and needing smaller amounts of data.

“These results show the power of new materials to solve many of the crucial challenges facing AI today,” said Prof. Incorvia.

1. Will Knight, “AI Can Do Great Things—if It Doesn't Burn the Planet”, WIRED, https://www.wired.com/story/ai-great-things-burn-planet/