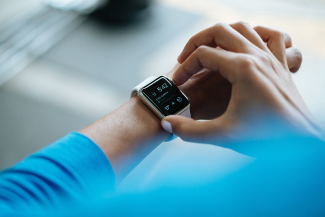 Prof. Edison Thomaz of Texas ECE is part of a team exploring the use of wearable technology to prevent kidney stones. The team received a five year, $2.97 million grant from the National Institute of Diabetes and Digestive and Kidney Diseases to address this problem.

The team includes David Conroy, professor of kinesiology and human development and family studies, Necole Streeper, assistant professor of surgery at the College of Medicine, both from Penn State University, as well as Nilam Ram, professor of communications and psychology at Stanford University.

The technology, called sipIT, is a technology-based intervention to promote fluid intake, increase urine output, and reduce risk of kidney stones. SipIT combines mobile, wearable, and connected technology to reduce the burden on participants. Participants use a smartphone app, smartwatch, and connected water bottle to track their fluid intake. The researchers also have developed a new algorithm that enables smartwatches to detect when someone drinks. SipIT is designed to promote habit formation so that, once people have used sipIT for a period of time, they will continue to consume fluids even without using the sipIT tools.

Thomaz and his research group have developed a new algorithm that enables smartwatches to detect when someone drinks. They developed a method for fluid intake detection and optimized it to run in near real-time on a commodity smartwatch platform.

"Wearable technology is a breakthrough in the health sciences because it allows researchers to obtain objective measures of behavior and health states in naturalistic settings for the first time," said Thomaz. " Passive tracking of physical activities with smartwatches and Fitbit-style devices has already had a deep impact in our understanding of sedentary behaviors, mobility and even re-hospitalization risk for numerous health conditions."

"We have now moved towards the detection and characterization of more complex health behaviors such as dietary intake and drinking. It is very rewarding to form collaborations such as with my Penn State colleagues, and bring this work a step closer to impacting people's lives in such an important way."

Prof. Edison Thomaz is an Assistant Professor in the Department of Electrical and Computer Engineering at The University of Texas at Austin. He holds a Ph.D. in Human-Centered Computing from the School of Interactive Computing of the Georgia Institute of Technology, and a S.M. in Media Arts and Sciences from the MIT Media Lab. Prior to his academic appointments, Dr. Thomaz held industry positions at leading technology companies such as Microsoft and France Telecom. Dr. Thomaz's research focuses on the sensing, recognition and modeling of everyday human life activities in service of health and well-being applications. His work combines technical approaches from Ubicomp, HCI, Machine Learning, and Signal Processing. Over the last decade, Dr. Thomaz has developed new human-centered approaches for collecting, visualizing and analyzing activity-centered sensor data using commodity devices.