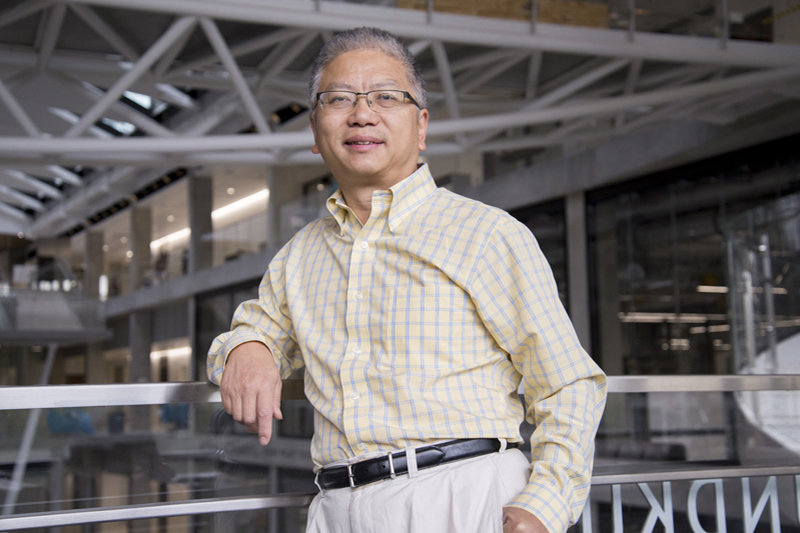 Dr. Alex Huang is the Dula D. Cockrell Centennial Chair in Engineering at the Department of Electrical and Computer Engineering at UT Austin. Dr. Huang received the bachelor's degree in electrical engineering from Zhejiang University, China in 1983 and his M.S. degree from University of Electronic Science and Technology of China in 1986. He received his Ph.D. in electrical engineering from University of Cambridge, UK in 1992.  Prior to joining UT Austin, Dr. Huang has been a faculty member at Virginia Tech (1994-2004) and NC State University (2004-2017). At NC State, Dr. Huang has established a number of internationally renowned public-private partnerships such as the NSF FREEDM ERC in 2008 ,NCSU's Advanced Transportation Energy Center (ATEC) in 2008 and the DOE PowerAmerica Institute in 2014.

Dr. Huang is a world renowned expert of power semiconductor devices, power electronics, smart grid and renewable energy system. He has published more than 550 papers in journals and conferences, and is the inventor of more than 20 US patents including several patents on the Emitter turn-off (ETO) thyristor technology that received a prestigious R&D 100 award in 2003. Dr. Huang is also widely credited for his contribution in developing the Energy Internet concept and the Solid State Transformer (SST) based Energy Router technology. His work on the SST has been named by MIT Technology Review as one of the world’s 10 most important emerging technologies in 2011. He has graduated more than 80 Ph.D. students and master students. Dr. Huang is a fellow of IEEE and the general chair of IEEE ECCE Conference in 2012. He is also a fellow of the National Academy of Inventors. Dr. Huang is the recipient of 2019 IEEE IAS Gerald Kliman Innovator Award.

Dr. Huang is currently active in the following research areas and he welcomes inquiries by perspective research students and postdoctoral researchers.