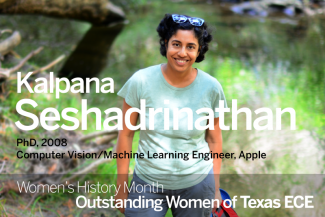 We sat down with alumna Dr. Kalpana Seshadrinathan (PhD, 2008) to discuss her career in electrical and computer engineering. Seshadrinathan is part of the team that received a 2020 Technology & Engineering Emmy® Award.

Tell us a bit about yourself.

I received my Ph.D. from the University of Texas at Austin, where I worked with Prof. Alan C. Bovik on algorithms for measuring perceptual video quality. I am a Computer Vision (CV)/Machine Learning (ML)/video processing researcher with over 10 years of industry experience in algorithm development. I am currently working as a Computer Vision/Machine Learning engineer with Apple in Cupertino, CA.

I am an inventor on over 20 patents and have published over 15 papers peer reviewed academic conferences and journals. I worked on mobile computational photography and multi-camera systems at Intel and was part of the team that launched the Dell Venue 8 tablet with 3 cameras and depth sensing in 2015. I received a 2020 Technology & Engineering Emmy® Award with Prof. Bovik's team at The University of Texas at Austin for "Development of Perceptual Metrics for Video Encoding Optimization". I am a recipient of the IEEE Signal Processing Society Young Author Best Paper award (2013) and Conference Best Paper Award for Industry (2017). I am a two-time recipient of the Intel high five award (5 filed patents in a year) with over 20 granted US patents. I was one of 84 researchers nationwide selected to participate in the US National Academy of Engineering (NAE) Frontiers of Engineering (FOE) symposium in 2018.

Who has been a major influence on your career?

This would actually be Dr. Bovik, hands down. He is a wonderful Ph.D. advisor, always empowering his students with freedom in research and a deep trust and belief in their abilities, which is extremely motivating. Even after I graduated from UT, he's always followed my career, providing advice and mentorship all along the way with his vast experience, knowledge and influence. The single most important inflection point in my career has been the opportunity to work with him and learn from him as his Ph.D. student. For female influencers, I would say it is Dr. Lisa Su, CEO at AMD. I find her career path admirable especially since she is as an Electrical Engineering Ph.D. (like me) who was able to rise successfully to the position of CEO which is a rarity, turn the fortunes of the company around and has been named "Most powerful women in business" by Fortune Magazine

Academically and professionally, UT is the place where I grew up from a young engineer to a researcher in video processing and my most positive memory is the whole hearted dedication, time and effort spent by the Professors at UT in helping us achieve this transformation. UT is also the place where I made so many friends for life, especially within LIVE (Laboratory for Image and Video Engineering), where we spent countless hours doing research, watching movies and cricket on the lab projector and playing ping pong.

My proudest moment was when Dr. Bovik called me to tell me that I am one of the innovators named on the 2020 Technology and Engineering Emmy awarded to UT Austin. For the first time in my life, I could tell my parents and family about the award and they had heard about it and could understand the content of UT's press release describing our work :)

You have accomplished so much in such a short period of time (20+ patents, Emmy, awards, etc.), is there a particular goal you have in mind for the future?

The one thing that drives me is solving tough and important problems and always learning along the way. I hope to share my passion for technology and engineering with collaborators and students I mentor through various STEAM programs to aspire them into making an impact in this exciting field.