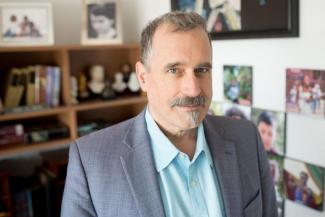 The National Academy of Engineering (NAE) announced today that Alan Bovik, professor and Cockrell Family Regents Endowed Chair in Engineering #3 in the Department of Electrical and Computer Engineering at The University of Texas at Austin, has been elected to the prestigious academy this year. Prof. Bovik was elected "for contributions to the development of tools for image and video quality assessment."

Election to the National Academy of Engineering is among the highest professional distinctions accorded to an engineer. Academy membership honors those who have made outstanding contributions to "engineering research, practice, or education, including, where appropriate, significant contributions to the engineering literature" and to "the pioneering of new and developing fields of technology, making major advancements in traditional fields of engineering, or developing/implementing innovative approaches to engineering education."

Professor Al Bovik (HonFRPS) holds the Cockrell Family Endowed Regents Chair in Engineering at The University of Texas at Austin, where he is Director of the Laboratory for Image and Video Engineering (LIVE). He is a faculty member in the Department of Electrical and Computer Engineering, the Wireless Networking and Communication Group (WNCG), and the Institute for Neuroscience. His research interests include digital television, digital photography, visual perception, social media, and image and video processing.

Prof. Bovik, an Honorary Fellow of the Royal Photographic Society, holds the Cockrell Family Endowed Regents Chair in Engineering at The University of Texas at Austin, where he is Director of the Laboratory for Image and Video Engineering (LIVE).

He and his students have twice been recognized by the Academies of Television and Arts & Sciences, with a Technology & Engineering Emmy® Award in 2020, and a Primetime Emmy® Award for Outstanding Achievement in Engineering Development in 2015.

His research interests lie at the confluence of video engineering and visual neuroscience, where he is well known for creating perception-based models and algorithms for predicting or improving the visual quality of images and videos. He has published more than 1,000 papers in related fields, which have been cited more than 120,000 times in the open literature.

He has received numerous awards and accolades for his contributions. He received the IEEE Edison Medal in 2022 for "pioneering high-impact scientific and engineering contributions leading to the perceptually optimized global streaming and sharing of visual media.” In 2019, he was awarded the Progress Medal by the Royal Photographic Society, the oldest and most prestigious honor in the field of photography as well as the IEEE Fourier Award for Signal Processing in 2019 “For seminal contributions and high-impact innovations to the theory and application of perception-based image and video processing.” In 2017, he received the Edwin H. Land Medal from The Optical Society of America  “for substantially shaping the direction and advancement of modern perceptual image quality theory, and for energetically engaging industry to transform his ideas into global practice.”

He is a Fellow of the IEEE, the Optical Society of America (OSA), the Society of Photo-Optical and Instrumentation Engineers (SPIE), and Honorary Fellow of the Royal Photographic Society (HonFRPS). He is a member of both the Television Academy (ATAS) and the National Academy of Television Arts and Sciences (NATAS).