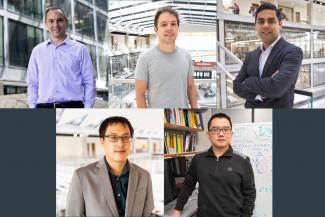 Five Texas ECE faculty, Alex Hanson, Brian Johnson, Jaydeep Kulkarni, August Shi, and Atlas Wang have been selected to receive a Faculty Early Career Development (CAREER) Award from the National Science Foundation (NSF). The award is the most prestigious offered by NSF’s CAREER Program, providing up to five years of funding to junior faculty members who exemplify the role of teacher-scholars through outstanding research, excellent education and the integration of education and research within the context of their organizations’ missions.

Alex Hanson, assistant professor and Fellow of the Jack Kilby/Texas Instruments Endowed Faculty Fellowship in Computer Engineering in Texas ECE, received the award for his research on "Power Magnetics for MHz Frequencies." He received the B.E. degree in electrical engineering from Dartmouth College in 2014 and the S.M. and Ph.D. degrees from the Massachusetts Institute of Technology in 2016 and 2019 respectively.  His research interests include component- and system-level power electronics with emphasis on high-frequency magnetics and circuits.  He is also interested in leveraging power and energy in diverse applications like medicine, aerospace, etc.

Brian Johnson, assistant professor and a Fellow of the Jack Kilby/Texas Instruments Endowed Faculty Fellowship in Computer Engineering in Texas ECE received his award for his research on "A Multiphysics Framework for Modeling, Analysis, and Experimentation of Power Systems and Power Electronics." He obtained his M.S. and Ph.D. degrees in Electrical and Computer Engineering from the University of Illinois at Urbana-Champaign, Urbana, in 2010 and 2013, respectively. Previously, he was the Washington Research Foundation Innovation Assistant Professor within the Department of Electrical and Computer Engineering at the University of Washington in Seattle. Prior to joining the University of Washington in 2018, he was an engineer with the National Renewable Energy Laboratory. His research interests are in renewable energy systems, power electronics, and control systems.

Jaydeep Kulkarni, assistant professor, Fellow of Silicon Laboratories Endowed Chair in Electrical Engineering, and Fellow of AMD Chair in Computer Engineering in Texas ECE, received his award for "Advancing Combinatorial Optimization Accelerators with Compute in Memory Design Approach." He received the Ph.D. degree from Purdue University in 2009. During 2009-2017, he worked as a Senior Staff Research Scientist at Intel Labs in Hillsboro, OR. He has filed 35 patents, published 2 book chapters, and 75 papers in referred journals and conferences. His research is focused machine learning hardware accelerators, in-memory computing, emerging nano-devices, heterogeneous and 3D integrated circuits, hardware security, and cryogenic computing.

August Shi, assistant professor and Jarmon Innovation Fund Fellow in Texas ECE, received his award for "Mitigating Flaky Tests." August obtained a Ph.D. in Computer Science at the University of Illinois at Urbana-Champaign in 2020. He obtained a B.S. in both Computer Science and Electrical and Computer Engineering from The University of Texas at Austin in 2013. His research interests are in software testing, and he is in particular interested in regression testing. August’s work focuses on how to make regression testing both (1) more reliable with respect to flaky tests and (2) faster without loss in quality of testing. His work on regression testing has received an ACM SIGSOFT Distinguished Paper Award.

Atlas Wang, assistant professor and Fellow of the Jack Kilby/Texas Instruments Endowed Faculty Fellowship in Texas ECE received his award for "Learning Optimization Algorithms from Data: Interpretability, Reliability, and Scalability." He received his Ph.D. degree in ECE from UIUC in 2016, advised by Professor Thomas S. Huang; and his B.E. degree in EEIS from USTC in 2012. Prof. Wang has broad research interests spanning from the theory to the application aspects of machine learning (ML). Most recently, he studies efficient ML / learning with sparsity, robust & trustworthy ML, AutoML / learning to optimize (L2O), and graph ML, as well as their applications in computer vision and interdisciplinary science.