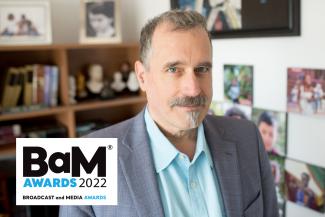 Al Bovik and the Laboratory for Image and Video Engineering (LIVE) are the recipient of a BaM (“Bammy”) Award® from the International Trade Association for Broadcast & Media Technology, in December 2022, for "perceptual picture quality algorithms and databases for streaming and social media." BaM Awards® are given to “any product that is recognized by the judging panel is not just an innovative solution but is genuinely important to the market and sets the standard in its category.”

The BaM Awards® were announced at an awards ceremony on December 1, 2022 in London, England.

Professor Al Bovik (HonFRPS) holds the Cockrell Family Endowed Regents Chair in Engineering  in the Chandra Family Department of Electrical and Computer Engineering in the Cockrell School of Engineering at The University of Texas at Austin, where he is Director of the Laboratory for Image and Video Engineering (LIVE). He is a faculty member in the Department of Electrical and Computer Engineering, the Wireless Networking and Communication Group (WNCG), and the Institute for Neuroscience. His research interests include digital television, digital photography, visual perception, social media, and image and video processing.