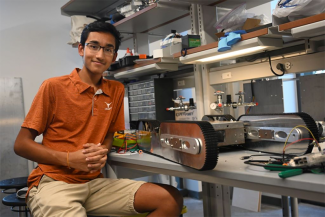 Every once in a while, a young person already so accomplished comes along and makes you wonder aloud “what am I doing with my life?” Siddharth Thakur is one of those young people.

Even in the sea of brilliant future engineers at the Cockrell School, the 17-year-old stands out. Originally from Wisconsin, Thakur just arrived on campus for his first year as an electrical and computer engineering major at The University of Texas at Austin, and he brings an impressive resume of entrepreneurship. As a high schooler in the Houston area he started down a path to inventing a robot that can enter burning buildings to search for human life via remote control. He sprang into action after learning about the lack of technological tools available to firefighters to keep themselves safe while saving people.

This incredible innovation known as FireBot has understandably created a lot of buzz, and it landed Thakur a spot as a finalist in the prestigious Collegiate Inventors Competition. As one of six finalists in the undergraduate category, Thakur will present FireBot virtually to a panel of judges that includes inductees of the Inventors Hall of Fame and United States Patent and Trademark Office officials. The presentations are set for Oct. 13, and the winners will be notified the following day.

FireBot can climb obstacles, and it is outfitted with live video, thermal imagery capabilities and sensors. Firefighters can use a two-way speaker to lead conscious victims out of a burning building or activate a siren and GPS map to help them quickly find and rescue unconscious victims.

We spoke with Thakur about FireBot, what’s it like being on campus, and the spark that lit has passion for entrepreneurship.

First of all, welcome to UT! What’s it been like being on campus after spending chunks of the last two years learning online?

After spending much of the last two years online, living on campus has been a dramatic and uplifting change. Connecting with both new and old friends, exploring campus, meeting my professors, joining clubs and working at the Texas Inventionworks facility have been some of my favorite activities since arriving on campus.

I am thankful for the university’s, students’ and faculty’s commitment to health guidelines as facilities and resources are re-opened. This has allowed me to collaborate with my peers and advisors effectively and safely. I am excited to be starting my undergraduate journey at such a pivotal and explosive moment at UT. I look forward to being on campus living, researching, and collaborating with others in-person!

Let’s talk about FireBot. You invented this temperature resistant robot that can be controlled remotely inside burning buildings and search for human life. Where did you get the idea for this?

Around four years ago, I heard about the death of a local firefighter on the news. At the time, I was working on a high school science project at the Houston Community College Fab Lab, and after a discussion with Mr. Fields, my advisor and the lab manager, I was inspired to reach out to my local fire department.

Following a discussion with my fire chief, I learned of the vast dangers firefighters consistently face when searching for human life in building fires. I was appalled as they described their lack of technology and motivated to use my technical skills to develop a robotic solution to increase the chance that our local firefighters returned home safely.

As I interviewed other fire departments around the country, I learned this issue was not just a local problem: it was systemic. Firefighters nationwide are required to search structural fires for victims, regularly exposing them to life-threatening situations, leading to countless fatalities each year and lifelong health problems.

Is there a prototype of FireBot? How has it changed since you first conceived of the idea?

FireBot has gone through three prototypes. Since the conception of the idea, FireBot has undergone significant changes following feedback and new ideas from firefighters and search-and-rescue experts. From a four-wheeled car to a tracked, obstacle-climbing tank; from a simple control loop to a semi-autonomous robot dashboard; the robot itself has dramatically changed looks and functionality, while the central goal of saving both firefighters’ and victims’ lives has remained.

Is this your first major invention? What other projects have you worked on?

Yes, FireBot is my first major invention. Though I have designed and collaborated on several other engineering projects in research labs and in high school science clubs, most projects have either addressed a theoretical challenge or were not commercially feasible.

One other important project I worked on came during my junior year of high school, when I was fortunate enough to be chosen to be a part of Dr. Acevedo’s research team in the Ecological and Environmental Lab at the University of North Texas. Our team wanted to address water wastage and develop an agricultural wireless sensor network to provide real-time monitoring of farmers’ fields to promote efficient irrigation practices. In this high-paced environment, I eagerly learned new concepts and insights into real-world engineering, much of which has empowered me to pursue my other endeavors, including FireBot.

What was the spark that made you want to be an inventor/entrepreneur?

My innovating obsession started long ago when I was given bags of loose LEGO parts instead of expensive sets. I began crafting cars from the few bricks and pulleys I had, learning about gears and torque. Over time, I progressed from simple drivetrains to complex LEGO machines, building remote-controlled forklifts and robotic gumball machines. Despite its simplicity, I have returned again and again to prototype and even integrate LEGOs into my projects. Developing mechanical LEGO constructions solidified my passion for hands-on building and sparked my desire to invent and develop solutions for problems in my local and global community.

What do you hope to get out of the competition? Do you plan to continue with FireBot and someday commercialize it?

I hope through FireBot and this competition to bring much-needed attention to the often unknown and deep-rooted problems our brave firefighters battle around the world. I hope that through this competition, my robot can be propelled from a laboratory prototype into the hands of firefighters, making an impact on their day-to-day safety and wellbeing. This would affirm my childhood dream of using my engineering background to make an impact on the world around me.

I hope to continue developing FireBot as far into the future as I can. I have worked on this project for several years already, and I am passionate about bringing this solution to market where it will be available for fire departments across the board to utilize and increase both their firefighters’ and victims’ chances for survival.

I know you’re just getting started here, but what are your aspirations for your future career at this point?

As I explore the abundance of opportunities around UT Austin, I am most excited by the fields of entrepreneurship, aerospace and robotics. Through the incredible startup ecosystem in the Austin community, I aspire to build off my previous projects and collaborate on new ones as I enter the entrepreneurship career area. Though I am not fully sure where I will be in four years, I strive to benefit the world by combining my hands-on technical background and humanitarian spirit.