Lizy John Named Fellow of the National Academy of Inventors 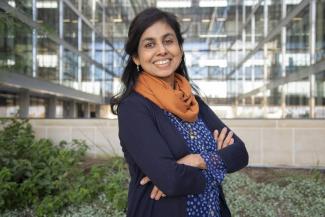 Lizy K. John is the latest member of The University of Texas at Austin community to be selected as fellows of the National Academy of Inventors, a prestigious distinction that has been awarded to a select group of 175 academic innovators around the world for 2020.

John, along with Van N. Truskett, are the only two new fellows from The University of Texas at Austin in this year’s class. They join 14 previous inductees from UT Austin.

“We are very proud of these two extraordinary members of our community, and I congratulate them on this tremendous honor,” said Sharon L. Wood, dean of the Cockrell School of Engineering. “Through their technology development and service to the university, Lizy and Van have inspired our students and strengthened our school’s reputation as a global leader in engineering innovation.”

John is a professor in the Department of Electrical and Computer Engineering, and she has made significant contributions to the evolution of computer architecture and systems design. She has authored two books on digital systems design, holds 13 U.S. patents and has co-authored more than 300 scholarly articles throughout her career.

Truskett, who graduated with a B.S. from the Cockrell School’s McKetta Department of Chemical Engineering in 1996, played a critical role in building Austin-based startup Molecular Imprints, which raised more than $150 million in venture capital before being acquired by imaging giant Canon in 2014. At UT Austin, Truskett uses her expertise in innovation and entrepreneurship to help faculty members and students launch startups and commercialize their research, serving as director of technology innovation development in the Office of Technology Commercialization and as executive director of the Texas Innovation Center.

Founded in 2010, the National Academy of Inventors aims to recognize inventors with patents issued by the U.S. Patent and Trademark Office, with an overall emphasis on innovation that clearly benefits society. The induction ceremony for this year’s honorees will take place June 7-9, 2021.