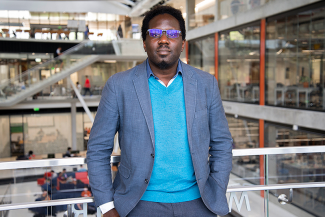 Prof. Deji Akinwande of Texas ECE has been elevated to a Fellow of the Institute of Electrical and Electronics Engineers (IEEE) for 2021 for "contributions to wafer-scale graphene synthesis and application to flexible devices."

IEEE Fellow is a distinction reserved for select IEEE members whose extraordinary accomplishments in any of the IEEE fields of interest are deemed fitting of this prestigious grade elevation.

His recent results on silicene have been featured by Nature news, Time and Forbes magazines and was selected among the top 2015 science stories by Discover magazine. He invented 2D memory, also known as atomristors. His work on flexible 2D electronics was highlighted among the "best of 2012" by the nanotechweb news portal and has been featured on MIT's technology review and other technical media outlets. He is a distinguished lecturer of the IEEE Electron Device Society, an Editor for Nature NPJ 2D Materials and Applications, and on the editorial boards for Science, ACS Nano, and Nano letters journals. He is the co-Chair of the Gordon Research Conference on 2D electronics, and was a past Chair of the 2018/2019 Device Research Conference (DRC), and the Committee Chair of Nano-devices for 2018 IEEE IEDM Conference. He co-authored a textbook on carbon nanotubes and graphene device physics by Cambridge University Press, 2011, and was recently a finalist for the Regents' Outstanding Teaching Award, the highest teaching award from the University of Texas System. He is a Fellow of the American Physical Society (APS).