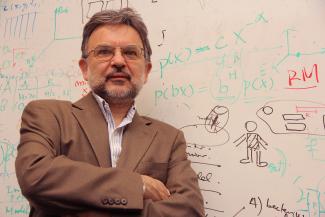 Radu Marculescu, professor in the Chandra Family Department of Electrical and Computer Engineering at The University of Texas at Austin, has been named a Fellow of the Association of Computing Machinery (ACM) for 2022 for "contributions to low-power and communication-based design of embedded systems." Dr. Marculescu becomes the sixth ACM Fellow among current Texas ECE faculty joining Jacob Abraham, Lizy John, Diana Marculescu, David Z. Pan, and Yale Patt.

The ACM Fellows program recognizes the top 1% of ACM Members for their outstanding accomplishments in computing and information technology and/or outstanding service to ACM and the larger computing community. Fellows are nominated by their peers, with nominations reviewed by a distinguished selection committee.

“Computing’s most important advances are often the result of a collection of many individual contributions, which build upon and complement each other,” explained ACM President Yannis Ioannidis. “But each individual contribution is an essential link in the chain. The ACM Fellows program is a way to recognize the women and men whose hard work and creativity happens inconspicuously but drives our field. In selecting a new class of ACM Fellows each year, we also hope that learning about these leaders might inspire our wider membership with insights for their own work.”

He received his Ph.D. in Electrical Engineering from the University of Southern California in 1998. Radu's current research focuses on developing new ML/AI methods and tools for modeling, analysis, and optimization of embedded systems, cyber-physical systems, social networks, and Internet-of-Things.

Radu has received the 2019 IEEE Computer Society Edward J. McCluskey Technical Achievement Award, for seminal contributions to the science of network on chip design, analysis, and optimization. For his work on design automation and embedded systems design, he has received the Donald O. Pederson Best Paper Award from the IEEE Trans. of Computer-Aided Design of Integrated circuits and Systems in 2012, the Best Paper Award of IEEE Trans. on VLSI Systems in 2018, 2011, and 2005, the 10-Year Retrospective Most Influential Paper Award from the Asia and South Pacific Design Automation Conference in 2013, as well as several best paper awards in major conferences and symposia. Most recently, he received the 2020 ESWEEK Test-of-Time Award from The International Conference on Hardware/Software Co-Design and System Synthesis (CODES).

Radu is a Fellow of IEEE cited for his contributions to the design and optimization of on-chip communication for embedded multicore systems.