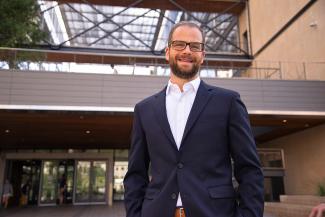 Seth Bank, professor in the Chandra Family Department of Electrical and Computer Engineer at The University of Texas at Austin, was one of 109 members from 24 countries to be elected as an Optica Fellow (formerly Optical Society of America OSA) for outstanding contributions to business, education, research, engineering, and service to Optica and our community.

Fellows are Optica members who have served with distinction in the advancement of optics and photonics. The Fellow Members Committee, led by Chair Takunori Taira, RIKEN / IMS, Japan reviewed 240 nominations submitted by current Fellows. The new Optica Fellows will be honored at the Society’s conferences and events throughout 2023.

Prof. Bank was honored for "For pioneering work on the growth of optoelectronic materials by molecular beam epitaxy."

He is a Fellow of IEEE. His group has received 5 Best Paper Awards and he has received the 2008 Young Investigator Award at the North American MBE Conference (NAMBE), a 2008 Young Faculty Award from DARPA, the 2009 Young Scientist Award from the International Symposium on Compound Semiconductors (ISCS), a Presidential Early Career Award for Scientists and Engineers (PECASE) in 2009 (nominated by ARO), an AFOSR Young Investigator Program (YIP) Award in 2009, an ONR Young Investigator Program (YIP) Award in 2010, and a Faculty Early Career Development (CAREER) Program Award from the NSF in 2010.