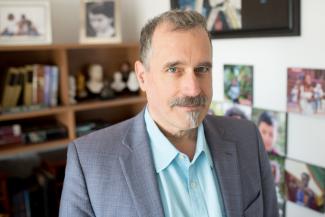 Al Bovik, professor in the Chandra Family Department of Electrical and Computer Engineering in the Cockrell School of Engineering at The University of Texas at Austin, has been elected a Fellow of the National Academy of Inventors (NAI). Election to NAI Fellow status is the highest professional distinction accorded solely to academic inventors.

Bovik was chosen for "demonstrating a highly prolific spirit of innovation in creating or facilitating outstanding inventions that have made a tangible impact on the quality of life, economic development, and welfare of society.”

"This tremendous honor is a testament to the significance of the impact Al has made through his inventions," said Diana Marculescu, chair of the Chandra Family Department of Electrical and Computer Engineering. "He has long been a pioneer in his field, and we are so proud to be associated with Al and his extensive achievements"

Founded in 2010, the National Academy of Inventors aims to recognize inventors with patents issued by the U.S. Patent and Trademark Office, with an overall emphasis on innovation that clearly benefits society. The induction ceremony for this year’s honorees will take place July 25-27, 2023.

Professor Al Bovik (HonFRPS) holds the Cockrell Family Endowed Regents Chair in Engineering  in the Chandra Family Department of Electrical and Computer Engineering in the Cockrell School of Engineering at The University of Texas at Austin, where he is Director of the Laboratory for Image and Video Engineering (LIVE). He is a faculty member in the Department of Electrical and Computer Engineering, the Wireless Networking and Communication Group (WNCG), and the Institute for Neuroscience. His research interests include digital television, digital photography, visual perception, social media, and image and video processing.