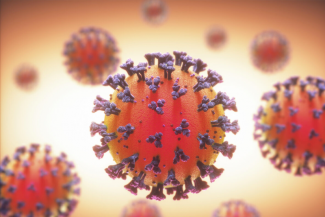 A first-of-its-kind portable disease diagnosis platform could help medical personnel quickly spot asymptomatic cases of COVID-19 and test for a variety of other ailments that are challenging to catch in their early stages.

The “lab-on-a-chip” platform created by engineers at The University of Texas at Austin can detect tiny amounts of virus in a sample. And a single chip can test dozens or even hundreds of patients faster and at a lower cost than current testing methods.

“Instead of having to bring people to hospitals, which isn’t always doable in remote areas, we can bring the hospital to the people,” said Ray Chen, a professor in the Cockrell School of Engineering’s Department of Electrical and Computer Engineering.

The research team has created a prototype of the diagnostic platform with a goal of bringing it to market. The researchers have worked on the platform for more than seven years, and they compared their approach with other cutting-edge testing techniques in a new paper published in Applied Physics Review, co-written with researchers at Austin-based Omega Optics, a startup founded by Chen that makes photonics components.

The principle advantage of this platform is its portability. There are other portable diagnostic products, such as the at-home COVID-19 tests people can buy at drug stores. However, Chen’s platform is more akin to clinical testing technology, shrunk down to a much smaller size. Other diagnostic platforms with similar levels of accuracy and sensitivity are larger, bulkier and unable to leave the hospital or medical facility.

The platform has also shown the ability to make accurate diagnoses on highly diluted samples that come from people with low amounts of virus in their bodies. That is important for diagnosing COVID-19 where many asymptomatic cases fly under the radar due to low viral load evading detection.

In addition to COVID-19, the system has shown an ability to better detect several types of cancer, which has a biomarker that is hard to test for in the early stages. And one of the only ways to adequately treat cancer is to catch it early, underscoring the need for more accurate, sensitive diagnostics.

“Cancer is so detrimental because many times the detection of the cancer biomarker is coming too late,” Chen said. “In our testing machine you can detect the biomarker at a much earlier stage, because we created a new method to enhance the interaction between the biomarker and light, which is key to detection.”

In addition to its portability, the system is inexpensive to produce and easy to scale rapidly because it relies on silicon chips. And it can test many saliva/nose swab samples on just a single chip. That reduces costs to consumers and governments that subsidize testing.

Chen’s team has patented several aspects of the platform, and the biosensing system has been developed across several federally funded research projects. The researchers are looking for additional manufacturing partners to further production and commercialization of the platform.

The lab-on-a-chip biosensing system includes two key breakthroughs that make it an order of magnitude more sensitive than other testing platforms. It has the ability to slow down how quickly light propagates, which increases detection capabilities. And the silicon chip has porous photonic crystal waveguides that encourage strong interactions between light and biomarkers.

News in America Institute of Physics