Banerjee, Dodabalapur, and Swartzlander Named Fellows of the National Academy of Inventors 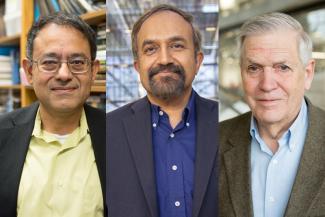 Sanjay Banerjee, Ananth Dodabalapur, and Earl Swartzlander, professors in the Department of Electrical and Computer Engineering at The University of Texas at Austin, have been selected as fellows of the National Academy of Inventors (NAI), a prestigious distinction that has been awarded to a select group of 164 academic innovators around the world for 2021.

"We are extremely proud and pleased to see our colleagues elected to the National Academy of Inventors this year," said Diana Marculescu, chair of the Department of Electrical and Computer Engineering. "This is a testament to their contributions to society and impact on every day lives through their inventions. Indeed, what starts in Texas ECE, changes the world."

Founded in 2010, the National Academy of Inventors aims to recognize inventors with patents issued by the U.S. Patent and Trademark Office, with an overall emphasis on innovation that clearly benefits society. The induction ceremony for this year’s honorees will take place June 13-15, 2022.

Sanjay Banerjee is the Cockrell Family Regents Chair Professor of Electrical and Computer Engineering and director of the Microelectronics Research Center at The University of Texas at Austin. He has over 1000 archival refereed publications/talks, 10 books/chapters, and 35 U.S. patents, and has supervised over 80 PhD and 70 MS students. He is a Fellow of IEEE, APS and AAAS. He is active in the areas of beyond-CMOS nanoelectronic transistors based on 2D materials and spintronics, fabrication and modeling of advanced MOSFETs, and solar cell

Ananth Dodabalapur is the Motorola Regents Chair in Electrical and Computer Engineering #1 in the Department of Electrical & Computer Engineering at The University of Texas at Austin.  He has published over 350 articles, a majority of them in refereed journals and has more than 27 U.S. patents issued.   He is a co-recipient of the 2002 Award for Team Innovation of the American Chemical Society and is a Fellow of IEEE.

Earl Swartzlander is a professor in the Department of Electrical and Computer Engineering at The University of Texas at Austin. Dr. Swartzlander joined the UT Austin faculty in 1990 after working for TRW Space and Defense in Redondo Beach, California. While working for TRW, he developed the first semi-custom integrated circuit with more than 100,000 transistors and led the development of a very high speed floating point FFT processor. He has authored one book, edited five books (including two on computer arithmetic), and published more than 275 conference and journal papers in the computer arithmetic, signal processing, and VLSI implementation fields.